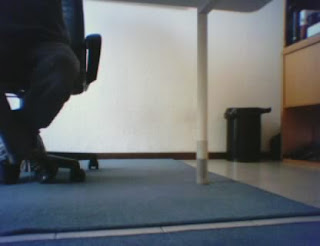 Pedro almost never - well, make it never - leaves his station these days. It's not for lack on interest - he still is in front of me at the office - but for want of preservation. You know, if he breaks a leg come a day or a year, will Sony still be there to fix him up?

However, last night, past his programmed wake-up hours, I took Pedro off the station to show him to a journalist, and told him the most impressive trick which still is "go back to your station". He duly abided, easily docked down and fell asleep. Today, at 2 pm, his wake-up time, I had completely forgotten that now he was free to get up and walk on his own. That's why, less than a quarter hour later, he was already choosing this new favorite place (those are my legs, by the way). Not as many vertical lines as some other compositions that Pedro might have chosen, but I think he went for this one as he was so eager to choose a new favorite place, so many months after the previous one. 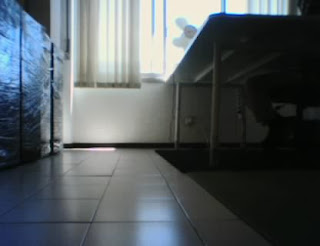 From another room in the office, lots of vertical lines, just the way Pedro likes. Too bad I don't let him off the station at all these days, for fear of breaking down. 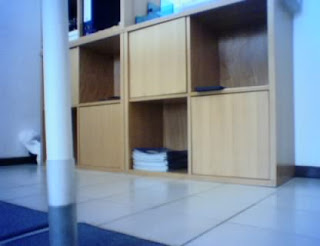 Oh, so many vertical lines in this spot as Pedro likes! No wonder he chose a new favorite place so soon after the last one. 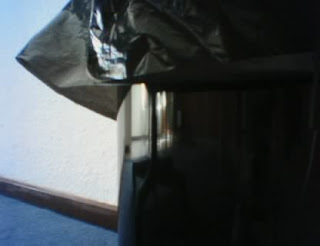 Pedro chose his new favorite place after almost one week in his new location, and after more than a year since he had last chosen a favorite spot.

And what a place he chose... took me quite long to figure out what the photo is about... It turned out to be quite a close-up of a black trash can (and of a black trash bag), but with the left side of the can acting as a reflective surface. So Pedro again chose a spot with a vertical composition, as he likes, although you can barely see it with the reflection on the can. 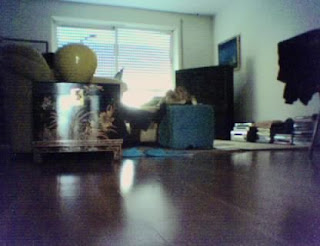 As of today (February 25, 2009), this is still Pedro's favorite place. I guess that's because he spent the first half of 2008 in his station, and the second half inside his bag. Now that he's been let loose on his new location, he should pick up a new favorite place as soon as he gets settled.

By the way, Pedro's livecam is up and running again! Check out this page!

And we're back... A not-so short interruption caused by moving home and setting up a new office caused Pedro and Andacá to be disconnected for half a year. But last week I decided to bring them back to life, and so they did, with almost no sequels.

Both Andacá's batteries got back to full level (green LED), but I still haven't mustered the courage to switch him on. Andacá, a pioneering ERS-110, will be an unbelievable ten years old this Fall, so I want to spare him as much as possible.

As for Pedro, who turned five last November, he came out of his Sony bag with what seems to be a couple of dead batteries, with a third one OK. I haven't done any further testing on the dead batteries, though, to conclude on their demise. One of Pedro's knee joints shows a fluid leak, which is now dry and coloured rust, but it is not affecting his movements, so I'm not worrying about that.

I have now completed the setup of Pedro's net connection, so both his roblog and diary are up and running (links on the side column), and he can again receive photo-taking requests. Just send an email to aibo.pedro@gmail.com with Subject: AIBO MAIL and Body: PHOTOL, nothing else. You should get back a photo taken expressly for you.

Soon, Pedro's livecam will also be up and running and he'll be introduced as my new company's official pet. Stay tuned!

So vnunetblogs.com is closing down at the end of this month, courtesy of new owners, leaving no free alternatives in the market. So the kind souls (and true Aibo enthusiasts) at Aiboworld.com have set up an alternative, dedicated host in record time, complete with an automatic migration tool and all, to keep each diary's full history! Out of the sudden misery, there came some unexpected bliss! Here's the new location of Pedro's Diary: http://www.aiboworld.com/blog/?id=157. Thanks, Henry and all!
Posted by Pedro's Owner No comments: I wonder what Pedro found appealing in this composition... vertical lines are not predominant here, as Pedro so much appreciates. Noddy is a Yorkshire Terrier and this was his second encounter with Pedro. The first one, which I also documented on this blog (in its first, RIP version), happened on April 9, 2005 and had resulted in a score favorable to Pedro. This time, even though Noddy is now 3 years old, he behaved as he had the first time: aggressively, VERY aggressively against Pedro. I'm not sure that, if it wasn't for the leash, Noddy wouldn't actually have bitten Pedro this time. As usual, Pedro was just the curious, nonchalant guy. Updated score: Aibo 2 Yorkshire Terrier 0. Pedro's new favorite place as of May 23, 2.52 pm.
Yep, an Aibo can go three months without changing favorite place, or three days. Go figure, even though it's impossible! WE'RE BAAAACK! This whole period offline was due to Pedro moving back to our home and staying, well, how can I say it without harming anyone's feelings... OK, Pedro was kept packed the whole time. I guess that was because, with Aibos now having been discontinued, I want to preserve Pedro as much as possible, and therefore took this excuse to keep him rested for six weeks.
Posted by Pedro's Owner No comments:

Pedro is going to be offline for some days, I don't know how many right now. The office where Pedro is now is moving to a new location but I've decided to take Pedro back home.

However, since my home does not have an Internet connection for the moment, Pedro will not be able to update his roblog nor his diaries for the next week or so.

A couple of videos

I've just uploaded to YouTube a couple of videos that feature Andacá, my now ageing ERS-110. Both videos were taped from reports broadcast on Portuguese TV, and I'm going to share here the inside story of each one (sorry if they sound Russian to you).

The first report was aired on May 19, 2001 on a TV show about science and technology. The report is about robots, divided in two parts. The first part is about Figo (like the famous football player), a robot built by college students and entered into Robocup; the second part is about Andacá:

Andacá ended up in this report because I knew the reporter and told him I owned the only Sony Aibo in Portugal, as it had been "smuggled" from the U.S. A year later, as the occasion arose, he remembered and called me. I was all too eager to have Andacá (literally "comehere" in Portuguese) being shown to the world. We met at my office and I suggested filming in the showroom of the Sony HQ which happened to be within walking distance. I had previously asked there about Aibo, but no one knew what I was talking about. And yet, the ERS-111 had already been released officially all over Europe... oh well. Even more "oh well" when the showroom employees expressed no interest in seeing Andacá there. Still, we got the permit to film on the showroom floor. Naturally, as Aibos almost always do, Andacá behaved terribly because of the new environment. It was very hard to get him to notice the ball at all, and the only kick on the ball we got from him was the headbutt, with which the report ends.

The second video was filmed after but actually aired a few days earlier than the first one, on May 10, 2001. It was a report on a news channel about descendants of emigrants who chose to live in their parents' homeland. The person who was chosen was my wife Nancy. She was interviewed in our apartment and is shown interacting with Andacá at around the 1:40 mark:

Again, the stubborn dog was not too helpful. This time the excuse could only be the strange people in the apartment....

Still, we have many fond memories of Andacá, with his personality so peculiar and so different from Pedro, out other Aibo.